At this time of year the great and good of garden designers are usually at full pelt in the garden show season with Chelsea this week and the BBC documenting, at least twice a day all the gardens that have taken months if not years of planning. This year Chelsea is taking place but in September which we are all eagerly awaiting but alas Bloom in the Park is not on once again. This is such a big blow for us as we have our show garden all ready to go, it was a huge disappointment to us last year that it didn’t go ahead but this year we had already become resigned to the fact that it probably wouldn’t and if I’m honest if we are going to the extreme workload and expense that it takes to put on the show garden then we want to do it when everyone can see it. Now all we need to do is try to get RTE to broadcast the show in as much detail as the BBC do with their show, In the last 15 months Ireland has become a nation of garden lovers and who wouldn’t want to see the beauty that is Bloom in the Park on the TV.

So this week along with next week I promised you that I would bring you some of my highlights of show gardens over the last number of years, there have been so many highlights and beautiful gardens although I always have my favourite designers who seem to pull gardens out of the bag each year and then someone pulls a garden out of the bag, one that I wouldn’t have expected to like but that it not only delights me but also excites me and brings not only our garden designs but our plant choices up another notch.

Probably my favourite of all was Luciano Giubbilei’s 2011 Laurent Perrier Garden where Clear-stemmed Parrotia persica framed a meditative space at one end of this garden of two halves an exquisite bamboo-panelled pavilion took Chelsea’s garden buildings to a new level. With swirling boulders and a clear pool, this was a masterclass in less is more. Lovely gentle planting in shades of bronze, pink and rust lifted this garden. What was not to like ? 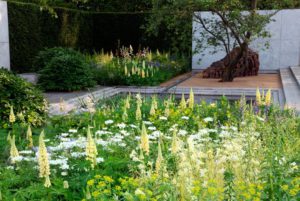 In 2016 the mighty Cleve West Brough us the M&G Investments Garden which will be remembered as one of the most effortlessly beautiful creations in the event’s recent history. Despite giving the impression of being a bit wild and wooly, the M&G Garden had fine structure, great planting and plenty of interest. Water settled in shallow depressions hewn from cool grey stone, rough-barked oaks cast dappled deep shade on the ground, and a dense carpet of “wild” flowers jostled to secure the brightest positions before the canopy closed over for summer. This didn’t win the best in show that year but that it could not overshadow the brilliance of Cleve West’s romantic, naturalistic scheme. 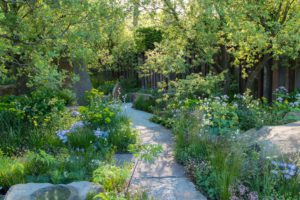 In 2014, the zingy greens and vibrant blues in the planting scheme, which featured in The Telegraph Garden at the RHS Chelsea Flower Show, made this another of my favourite gardens. Many congratulations to Tommaso del Buono & Paul Gazerwitz on winning a Gold medal thoroughly deserved! The garden featured themes from Renaissance landscapes and villa gardens of the northern Italian lakes. Splashes of green came from Euphorbia ceratocarpa, Euphorbia palustris and Euphorbia wallichii, whilst Anchusa azurea ‘Loddon Royalist’, Borago officials and Centaurea cyanus ‘Blue Boy’ provided pops of blue. Simply stunning! 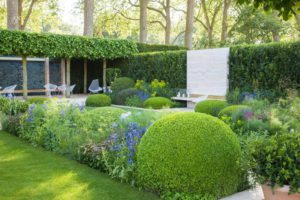 The Telegraph garden in 2010 was designed by Andy Sturgeon, and in his own words he designed this garden as a metaphor for the different journeys one can take through life.  Several paths lead through the garden and the visitor is presented with a number of choices.  Each route offers a subtly different experience yet ends in the same destination; a tranquil courtyard at the rear.
A series of three corten steel screens appear like monoliths, at first framing views and defining the routes but as you arrive alongside they open and offer glimpses through to the alternative route that could have been taken.  The planting is inspired by travel and features species from Mediterranean climates around the world including parts of Chile and Australia.  Despite having an exotic flavour I was keen to use stone and gravel from the UK as I always prefer to source materials locally.  The courtyard with water cascading into a narrow pool takes its cue from a typical Islamic garden. I couldn’t have put it better myself! 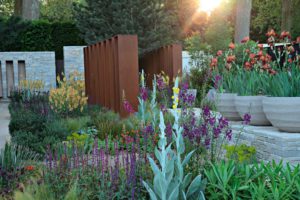 In 2014, Hugo Bugg designed the Royal Bank of Canada Waterscapes Garden became the youngest ever Gold medal winner. At just 27, the former RHS Young Designer Of The Year unveiled his sublime RBC Waterscape Garden, pushing the boundaries of garden design. Sophisticated, sustainable and symbolic, not only did it look stunning and feel instantly calming with the sound of trickling water, it highlighted global water issues and demonstrated ways we can conserve water in home gardens and commercial landscapes. 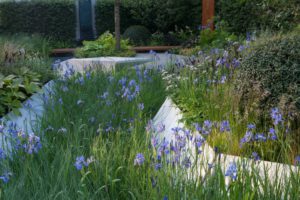 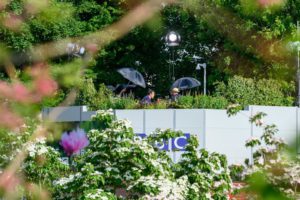 For next week I am going to be looking at our Home grown talent and the best of Bloom in the Park, for anyone that thinks we can’t do gardens like Chelsea wait til you see some of my showstoppers.