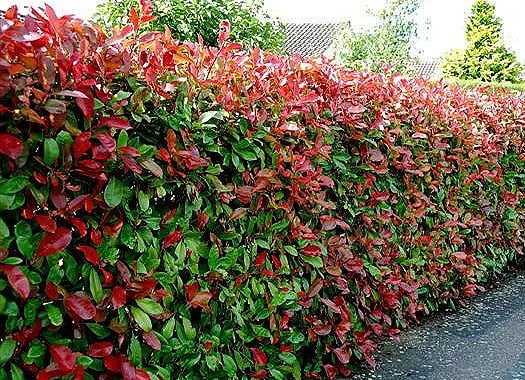 On the nursery we have so many different hedging options and each of them work in different ways for your needs and so at this stage in the year when we only have another 4weeks remaining of the bare-root season here is a no-nonsense guide to help you choose which hedging will work for you without the jargon and botanical descriptions that lets be honest mean very little to most people, the days of people doing Latin as a school subject are almost over, although one lady and former teacher I know will be horrified to hear me say this – Sorry Ann!
I’m going to split this up into Evergreen and deciduous (loses its leaves in Autumn/Winter) options to keep it simple. 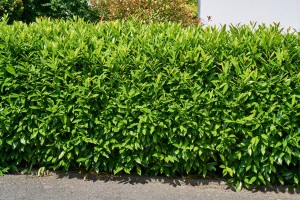 Botanical Names Prunus laurocerasus, Prunus laurocerasus ‘Rotundifolia’
also known as Cherry Laurel, Common Laurel,
The good news about Laurel hedging Fast-growing – the fastest growing hedging plant if you don’t want a conifer Evergreen Growth in a good year  up to 60cm (2ft) per year Least expensive non-conifer, evergreen hedging plant The best hedging plant for shady sites Tough, not fussy about soil & Hardy  Available in larger, more mature sizes Eventual height if let up to 6m (18ft) tall Hardy down to -20°C
Laurel is the quickest growing evergreen hedging plant that isn’t a conifer. Laurel is the quickest and cheapest way of creating an evergreen hedge.  Laurels will also provide the most instant hedging as the mature sizes, are bushy and can often create an instant screen when planted close enough.  Laurel hedges are dense and so provide a screen that you can’t see through.
Laurel leaves are rounded, glossy and bright green leaves and look good all year round.  They can be trimmed into a neat solid shape or they can create a less formal looking hedge. You will need to trim a Laurel Hedge at least once a year which can be seen as a con but then you can’t have everything!
Best of the Offers for Laurel Hedging
Laurel hedging Rootballed 120-150cm (4-5ft) €30.00 each (planted 2 to the metre)
Laurel Hedging Rootballed 175-200cm (6-7ft) €85.00 each (planted 1.5 to the metre) 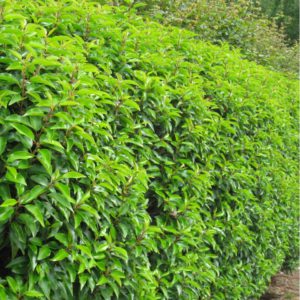 Botanical Name: Prunus lusitanica or Prunus lusitanica ‘Angustifolia’
The Good news about Portuguese Laurel Hedging Evergreen Neat & tidy formal appearance Fragrant white flowers and attractive red stems Growth in a good year 45cm (18in) per year Available in larger more mature sizes Needs less maintenance than some of the really fast growing options Not too fussy about soil but doesn’t like being waterlogged or in boggy ground Eventual height if let, up to 6m (18ft) Hardy to -20°C
Portuguese Laurel has a deep green leaf that is much smaller & less glossy than the leaf of the common Laurel. It is medium to fast growing although not as quick growing as Cherry Laurel. The stems are red when young and this contrasts well with the dark green leaves and adds interest. It forms an excellent evergreen garden hedge and can be kept to any shape or size.  It is easy to maintain and keep it looking neat and tidy
Best of the offers for Portuguese Laurel
Portuguese laurel Rootballed 60-80cm (2-3ft) €14.00 (planted 3 to the metre)
Portuguese laurel Rootballed 80-100cm (2.5 -3.5ft) €17.50 (planted 2.5 to the metre) 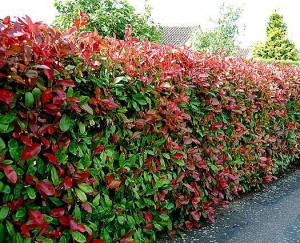 Botanical Name: Photinia x fraseri ‘Red Robin’
Also know as Red Robin
The Good news about Photinia Red Robin Brilliant red young leaves especially in spring giving a colour boost  Fast-growing hedging plant Evergreen hedging Speed of growth under ideal conditions: 60cm (2ft) per year Will grow in any free-draining soil Doesn’t mind shady positions Eventual height if let up to 4-5m (12-15ft) Hardy to -15°C
Photinia Red Robin is a popular, fast-growing, evergreen hedging plant that makes an attractive garden hedge with pruning, it will have more gaps if left untrimmed. It has bright red, young leaves in early spring and, if it is trimmed in late spring or early summer, it will produce more red shoots in summer. Photinia needs to be trimmed regularly (twice a year) to keep it dense. 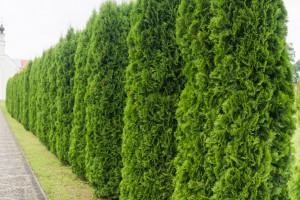 Common Name: Western Red Cedar, Pacific Red Cedar
The Good news about Thuja plicata Fast-growing hedging plants Evergreen hedging Tough & Hardy Available in larger, mature sizes Wind Tolerant Can shoot from old wood A good alternative to the Leylandii that doesn’t get so out of control Speed of growth in a good year up to 60-75cm per year Eventual height if let up to 30m (100ft)  Thuja will grow in all soils except those that are waterlogged for long periods in winter. Hardy down to -25°C
Thuja plicata is a fast-growing conifer that creates an evergreen hedge. Thuja are extremely hardy and will tolerate strong winds. They grow in most soils (except for water-logged soils). Thuja plicata is a bit bushier than Leylandii in the pot or as a rootballed hedging plant but they are slightly slower growing than Leylandii so generally costs a little bit more for the equivalent height plant.  Leylandii and Thuja will form a very similar, dense hedge although Thuja will usually shoot back from old wood, unlike the Leylandii. Thuja have aromatic, fruity foliage when brushed against. Keep them trimmed once a year to the height and width you need and they will form a fantastic hedge.
Best of the offers for Thuja plicata
Thuja plicata Rootballed 175-200cm (6-7ft) €30.00 (planted 1.5 to the metre)
Thuja plicata Rootballed 200-250cm (7-9ft) €45.00 (planted 1.5 to the metre) 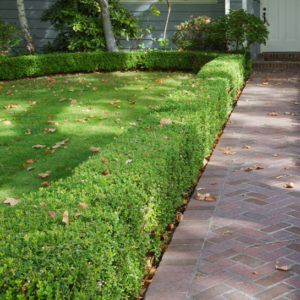 Botanical Name:  Buxus sempervirens
Also known as Box, Common Box, Boxwood, Buxus, European Box
The Good news about box hedging Good for formal ‘box shaped’ hedging Low maintenance  Makes a good small hedge Shade tolerant hedging plants Growth in a good year up to 20cm (8inches) per year Warning it can suffer from Box Blight especially in damp conditions when waterlogged Any free-draining soil in sun or shade Hardy down to -25°C
Eventual height if let 4m (12ft) but i have never seen it anywhere close to that tall and it can be trimmed to as low as 30cm (1ft) tall
Box hedging is a slow-growing, evergreen hedging plant with small leaves.  It is neat and compact in habit and makes a perfect small garden hedge. It has the benefit of being tolerant of shade
Best of the offers for Box hedging
Box hedging bare-root 20-25cm €2.80 7 to the metre
Box hedging bare-root 40-45cm €4.50 5 to the metre 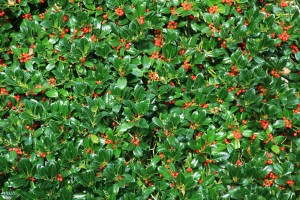 Botanical Name: Ilex aquifolium as well as lots of other Ilex varieties
Also known as Common Holly
The Good news about Holly Glossy green leaves Red berries in winter Evergreen Low-maintenance Prickly leaves for security Can be grown as part of a native or field hedge Growth in a good year 30cm (1ft) per year Holly hedging plants will grow in any free-draining soil in full sun or light shade. Holly will grow in sheltered or exposed sites Eventual height if let over 10m (33ft) but can easily be kept trimmed Hardy down to -20°C
An excellent evergreen hedging plant that has glossy, dark green, prickly leaves and red berries in the early winter. Good as an intruder deterrent.  Low maintenance as it is slower growing. Holly clips well to create a dense, formal garden or field hedge and will regenerate from old wood if you need to cut it back. 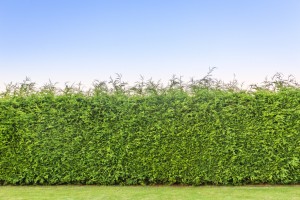 Botanical Latin Names  Cupressocyparis leylandii,
Also known as  Leyland Cypress, Leylandi, Conifer Hedging
The Good news about Leylandii Fastest-growing hedging plant Evergreen (keeps its leaves all year round) Least expensive (cheapest) especially at heights over 4ft (120cm) tall Speed of growth up to 1 metre (3ft) per year Available in larger sizes Leylandii is very tolerant of wind and cold temperatures Dense foliage acts as sound barrier Best at filtering particulates (air pollution) from passing traffic
Not fussy about soil or position but doesn’t like to be waterlogged. Eventual height if let over 30m (100ft) although they are best if kept well under control Hardy down to -25°C
Leylandii is a conifer that is the fastest –growing, evergreen, hedging plant and will create a hedge quickly.  Because it is fast growing, it is generally the cheapest way of forming an evergreen garden hedge and hence the most popular. It gets some very bad press but in the right location Leylandii is a great hedge and does create not only a screen but a sound barrier too.
If it is pruned every year, Leylandii will create a formal dark-green evergreen screen or box-shaped hedge, similar to a Yew hedge.  Leylandii can be kept to any height as long as you trim it twice a year. 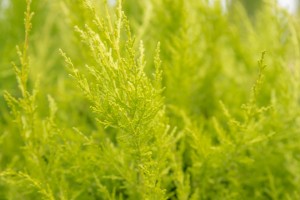 Botanical Names Cupressocyparis leylandii ‘Castlewellan Gold’,
Common Names:  Golden Leylandii, Golden Leyland Cypress, Golden Leylandi
The Good news about Castlewellan Gold Fast-growing hedging plant Evergreen Attractive Golden-yellow foliage Tough & hardy Available in larger sizes Growth in a good year up to 75cm (2’6”) per year Golden Leylandii will grow in any free-draining (i.e. not waterlogged) soil in full sun or partial shade. The foliage will be more golden in full sun and pale green in shade. Eventual height if let up to 25m (75ft) Hardy down to -25°C
Leylandii Castlewellan Gold is the most popular form of Golden Leylandii Hedging. It is fast growing so will form a hedge quickly. If it is trimmed every year, it will create a dense evergreen garden hedge that is bright yellowish-gold in the spring and summer.  The golden colour turns a more lime-green in autumn and it can turn a bronze colour in a cold winter. As with the green leylandii, we recommend trimming the sides of a Castlewellan hedge once a year and the tops twice a year. Castlewellan Gold Leylandii is slightly slower growing than the Green Leylandii for this reason it is usually slightly more expensive than Green Leylandii for the equivalent height plant.  It will grow in any soil except for water-logged soil. 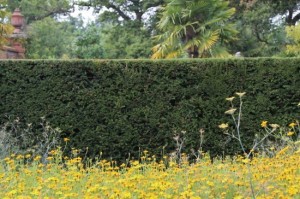 Botanical Name Taxus baccata
Also known as Irish Yew
The Good news about Yew Hedging Deep green formal hedge Small amount of Orange/Red berries in winter Evergreen Low-maintenance Growth in a good year 30cm (1ft) per year Yew hedging plants will grow in any free-draining soil in full sun to full shade. Eventual height if let over 3m10ft) but can easily be kept trimmed Hardy down to -20° Yew trees are very wind tolerant and hardy Yew is tolerant of urban pollution and a semi-coastal position
Yew is a dark green conifer that forms a superb, dense, evergreen hedge. It is often seen in stately homes and formal gardens as it can be trimmed into box-shaped hedging and topiary shapes. It can even be kept as a small hedge instead of Box hedging. As a result of the slow growth rate, it requires less maintenance once the hedge is established.
Best of the offers for Yew Hedging
Yew Hedging potted 45L 125-150cm (4-5ft) €48.00

This is only a small amount of the hedging plants so part two will be next week, so don’t miss that but in the meantime, get planting before the end of the season.