The Standard is Stunning ! 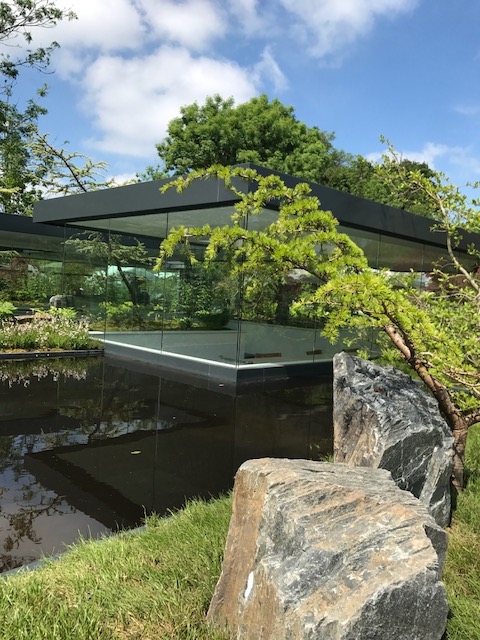 I was lucky enough to get an advance viewing of the show gardens today at Bloom in The Park ahead of the opening tomorrow through to Monday, no doubt many of you are going and for those that haven’t tickets yet, you will be missing out on something really special. The standard of the gardens this year is exceptional, I have been slightly disappointed over the last few years, with the gardens being a bit mwah! and the food sector taking over what was originally a garden festival but I was buzzing coming out of the Phoenix Park today.

My God the work that goes into those gardens and this year the work has really paid off, we are back to the quality of the first 5 years of the show and I was just delighted.  Like the Chelsea gardens there are a nice mixture of beautifully designed gardens and concept gardens, but all of the gardens have been exceptionally executed to make for one hell of a show. 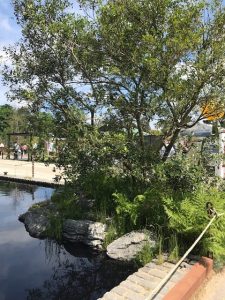 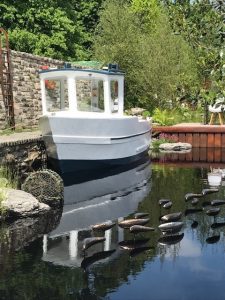 So what caught my eye? 3 gardens in particular caught me eye and firstly I am going to give the one which has some of my own trees in it a little plug but the garden was so well thought out and measured that my (even if they were beautiful) multistem birch trees where just a small part of this beautiful design by Andrew Christopher Dunne of The Sustainable Seafood Garden, it tells a story of the journey from tide to table of the fish and seafood from the seas around our small island and the garden is a movement from traditional, wild rural landscape to a more modern structured garden but the feel of the garden remains, the water is a large part of the garden and the fishing boat moored has a kitchen on board. Its a stunning garden and the planting is perfect. I spoke to Andrew to ask him about how he managed to get the garden to look so like it would in the wild, he told me ‘I grew a wild flower meadow, it was planted last year at my home, when we had the large rocks and water built in the garden then I brought the meadow in small pieces, sometimes in really tiny pieces to place between rocks. It was a painstakingly laborious task but to see the finished effect I am delighted with and it was worth all the effort’  One of my tips for top place. 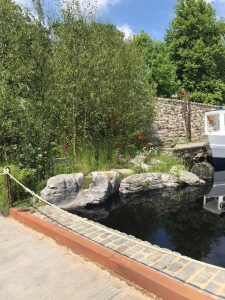 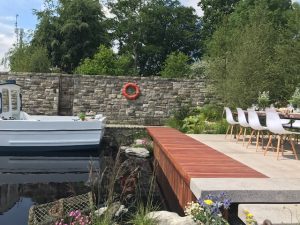 The next garden that really caught my eye was from such a seasoned designer, one only expects perfection from this couple but each time they give us something really special, Oliver & Liat Schurmann with their garden A Different Outlook sponsored by Savills.  This roof garden brings a modern office environment as close to nature as possible. The wild landscape garden wraps around a very modern glass structure which I am told by Oliver they intend to move to Connemara as a design studio, I was so very jealous thinking how much more creative I could be in such a beautiful place.  The planting was wild and natural and just stunning, the water was peaceful and serene and as always this couple’s garden are just awesome. Would you be able to take any of it for your own back yard? No, not really but that isn’t really the point of this garden but I really would love to take a bit of it. 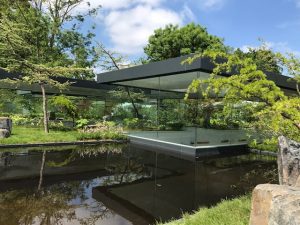 The last garden that really caught my eye was the Santa Rita garden by Alan Rudden entitled Life is Rosé, it was inspired by a trip Alan took to central America but to me it had a Mediterranean feel about it, the hard elements of the garden are made up of earthy raw materials with the exception of a steel wall that cuts the garden in two and adding just the right amount of sunshine yellow a colour that runs through the garden in such a way that it doesn’t overpower it but adds to the earthy tones of the garden. The planting is again exceptional with a number of large specimen arbutus trees. The garden is sponsored by Santa Rita and so this influences the finishes of the garden, as it should, with a secluded seating area for one to enjoy a glass or two and a beautiful structure if the Irish weather lets us down again. 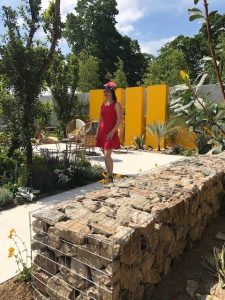 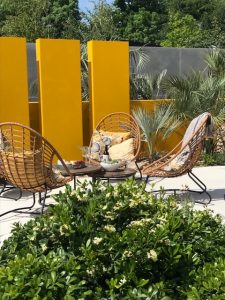 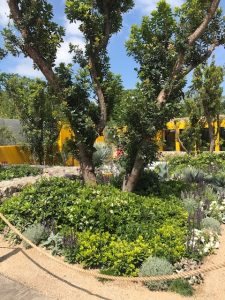 It is a show garden and as such it is  judged on its finish and it isn’t supposed to represent the planting of a real garden but I spoke to Alan about how some of the more tropical elements of the garden would stand up to our climate ‘90% of the plants would survive perfectly well in Ireland, the remainder would be ideal in a Dublin garden or on the sunny south east but might not stand up to the weather further north without some assistance.  If you really do want a garden with some of the exotics in it, it can be done, just a small amount of protection for the least hardy plants in the winter by wrapping them in fleece or similar at times of frost’ I really would like to see Alan get a Gold medal and I’m sure he will but will he get the much coveted Best in Show, we’ll have to wait and see.

I will feature another two gardens tomorrow including one from one of our own, Mark O’Loughlin of Sanctuary Synthetics in Naas who has cleaned up with not one but two gardens with his synthetic grass and also a couple of the charity gardens including one that we have sponsored here at Caragh Nurseries the Enable Ireland Garden, Until them for any of you going to Bloom on Thursday enjoy and let me know your favourites and things you liked.